Note: The mother of Barbe Menard, or earliest female ancestor in North America, was baptized in the Temple Calviniste in 1613.  Her Protestant baptism indicates that Barbe’s maternal grandparents were followers of John Calvin.  The French Protestants were severely persecuted and often offered the choice of death or conversion to Catholicism.  Barbe’s parents were married at St. Marguerite, La Rochelle, France in 1636, indicating that her mother converted to Catholicism before her marriage.

The Huguenots were French Protestant members of the Reformed Church established in France by John Calvin in about 1555, and who, due to religious persecution, were forced to flee France to other countries in the sixteenth and seventeenth centuries. The Protestant Reformation began by Martin Luther in Germany about 1517, spread rapidly in France, especially among those having grievances against the established order of government.

Portrait of John Calvin meditating. Engraved by Charpentier, after a painting by Ary Scheffer, 1858.

As Protestantism grew and developed in France it generally abandoned the Lutheran form, and took the shape of Calvinism. The new “Reformed religion” practiced by many members of the French nobility and social middle-class, based on a belief in salvation through individual faith without the need for the intercession of a church hierarchy and on the belief in an individual’s right to interpret scriptures for themselves, placed these French Protestants in direct theological conflict with both the Catholic Church and the King of France in the theocratic system which prevailed at that time. Followers of this new Protestantism were soon accused of heresy against the Catholic government and the established religion of France, and a General Edict urging extermination of heretics (Huguenots) was issued in 1536. Nevertheless, Protestantism continued to spread and grow, and about 1555 the first Huguenot church was founded in a home in Paris based upon the teachings of John Calvin. The number and influence of the French Reformers (Huguenots) continued to increase after this event, leading to an escalation in hostility and conflict between the Catholic Church and the Huguenots. 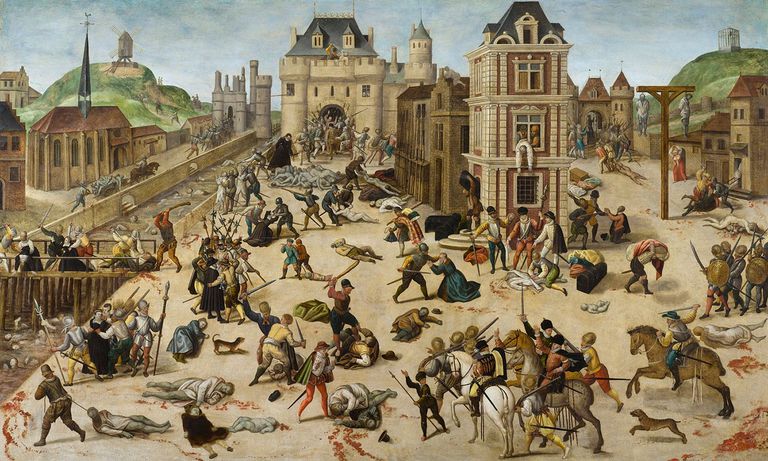 Huguenot painter Francois Dubois created The Massacre at Saint-Barthélemy not long after the event.

Finally, in 1562, some 1200 Huguenots were slain at Vassey, France, thus igniting the French Wars of Religion which would devastate France for the next thirty-five years. The Edict of Nantes, signed by Henry IV in April, 1598, ended the Wars of Religion, and allowed the Huguenots some religious freedoms, including free exercise of their religion in 20 specified towns of France. The Revocation of the Edict of Nantes by Louis XIV in October, 1685, began anew persecution of the Huguenots, and hundreds of thousands of Huguenots fled France to other countries.

The Promulgation of the Edict of Toleration in November, 1787, partially restored the civil and religious rights of Huguenots in France. Since the Huguenots of France were in large part artisans, craftsmen, and professional people, they were usually well-received in the countries to which they fled for refuge when religious discrimination or overt persecution caused them to leave France. Most of them went initially to Germany, the Netherlands, and England, although some found their way eventually to places as remote as South Africa. Considerable numbers of Huguenots migrated to British North America, especially to the Carolinas, Virginia, Pennsylvania, and New York. Their character and talents in the arts, sciences, and industry were such that they are generally felt to have been a substantial loss to the French society from which they had been forced to withdraw, and a corresponding gain to the communities and nations into which they settled.