There is a mathematical theory which implies that if the odds against something happening are unimaginably high, then that ‘something’ is almost certain to happen. Marlene’s mother’s family name is Lalonde, a family whose history is amazingly similar to the Vermette family history. In fact, it is possible that our earliest ancestors knew of each other in the relatively small colony of Montreal during the 1670’s.

Origins of the Lalonde Family

On 30 June 1665, Jean de Lalonde dit L’Esperance, originally from Normandy, France, arrived in Ville Marié, New France (later renamed Montreal). Evidence indicates that he was a soldier in the Sorel (or Monteil) company of the Carignan-Salieres Regiment and that he arrived in New France on the ship La Paix (or Le Brézé. The soldiers of the Sorel company and their regiment were sent by King Louis XIV to protect the colony from the local indigenous population, who frequently attacked the colonists.

The soldiers quickly subdued resistance in the area and the colony flourished. In 1668, most of the regiment was recalled to France. To strengthen the colony, the king offered the soldiers inducements of money and goods to stay on as colonists. Jean de Lalonde took the king up on his offer. The year before, in 1667, he had married Francoise Hurrubert, a Fille du Rois, but that marriage was annulled. In New France, it was not uncommon for ‘trial’ civil marriages (and sometimes church marriages) to be annulled with no prejudice in the eyes of the church. In keeping with this practice, Jean de Lalonde next signed a civil marriage contract with Marie Poire on 27 Sept 1669. This contract was also annulled. In his search for the perfect mate, he next married Pierrette Vaillant (another Fille du Rois from Paris) on 13 Oct 1669. This marriage was also annulled. Apparently not easily discouraged, he next married Marie Barbant on 14 November 1669, before the notary Antoine Ahdemar in Sorel (near Montreal). Marie Barbant was another Fille du Rois who arrived in 1668. Like Jean de Lalonde, she was also from Normandy, France. She was unusual in two ways — she was older (29) when she arrived, and she already had a substantial dowry of 200 livres (about enough money to buy 10 muskets). This marriage seemed to suit them both, and Jean and Marie established a farm in Lanoraie on the St. Lawrence river, just east of Montreal and across the river from Sorel.

Let’s take a moment (and a deep breath) to think about this. In the space of two years, Jean de Lalonde was discharged from the Army, married and divorced three women, married a fourth woman, and started a farm. I can add no meaningful comment except to admire the determination of French colonists.

Jean de Lalonde and Marie Barbant had five children, four boys and a girl. Two sons, Jean Baptiste and Guillaume, lived to start families of their own. The second son, Guillaume de Lalonde, is the beginning of a branch in Marlene’s family tree. 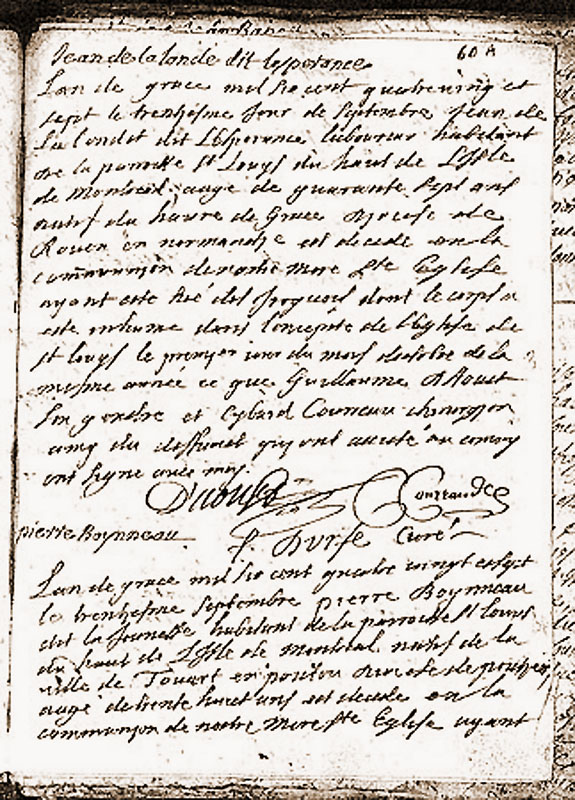 On September 30, 1687, Jean was working in the fields near his home when he was attacked and killed by raiding Indians. The peace he had helped to establish as a soldier was broken and a period of unrest started in New France.  Baie D’Urfé, a town Jean helped to found, was abandoned until peace was restored in 1701.

In the late 1600’s and early 1700’s, France and England were in a continuous struggle for dominance in the new world. King William’s War (1688 – 1699) which pitted the English against the French and Indians, was followed almost immediately by Queen Ann’s War (1702 – 1713). In 1704, the French were afraid that British military units from the English colonies to the south would attack Acadia and gain control of that area (which they eventually did in 1713). In order to divert the English attention from Acadia, raids were carried out by the French with assistance from indian tribes against the Colonial New England settlements. The raids penetrated deep into the colonies, using Lake Champlain and major rivers to travel quickly and achieve surprise. The town of Deerfield, Massachusetts was attacked on February 29, 1704. Under the leadership of Hertel de Rouville, 50 French soldiers and 200 Abenaki Indians attacked the town. At the time, Deerfield was a town of 300 residents and was the northwestern most settlement in New England. The French raiders killed 47 residents and took 111 prisoners prisoner after burning many of the buildings. Sarah Allen, a 12 year old Puritan girl, was taken prisoner and was transported with the other captives back to Montreal. She became a servant in the home of Jean Quenet at Baie D’Urfé, and was baptized as a French Catholic with the name of Marie Madeleine Heléne in 1705.  Guillaume de Lalonde lived in the Quenet home for a time.  She apparently caught his eye and they married on 27 April 1710. 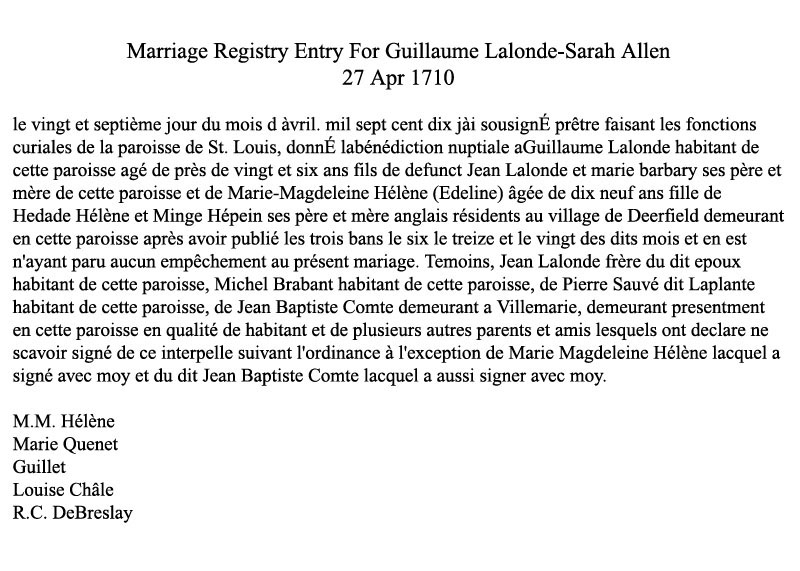 French transcription of the parish record of the marriage of Guillaume Lalonde and Sarah Allen on 27 April, 1710 in Montreal, Quebec, Canada

Marie Madeleine Heléne (Sarah Allen) and Guillaume de Lalonde had 12 children and eventually settled in 1727 in Les Cedres, Soulanges, Quebec (west of Montreal). Guillaume became a farmer and fur trader (‘voyageur’) making several expeditions to the west, probably to the Great Lakes region and the mid-western United States.  Marie Madeleine (Sarah) died on 25 December 1764.  The branch of the family started by Guillaume and Marie Madeleine (Sarah) stayed in the Soulanges area for over one hundred years.

Many generations later, on 4 Nov 1861, a descendent of Sarah and Guillaume named Francis Lalonde did an shocking thing for his time — he married a young and fiercely independent Scottish girl named Christy McInnis.

Francis Lalonde and Christy McInnis’ family is representative of the significant changes that took place in the early years of modern Canada. In 1753, the British conquered French Canada but allowed the French Canadians to maintain their religion and civil laws in the province of Quebec. This was a savvy move on the part of the British in that the French were fiercely protective of their society and their culture.  Despite that policy, French settlers in Acadia continued to resist the British governance and the resulting conflicts led to the forced relocation of over 11,000 Acadians.

Although many British moved to Quebec, they left Quebec pretty much alone and concentrated on settling what was then known as “upper Canada” (now the province of Ontario). The British sponsored immigration of thousands of colonists from Scotland, Ireland, and England to upper Canada. These colonists developed essentially a parallel culture with different churches (even separate Catholic churches and schools in the same settlement) and different methods of civil rule. In the 1800’s, and primarily in the Ontario region, the French slowly began to mix with the British, and marriages such as Francis and Christy’s happened more frequently (although still very rare). 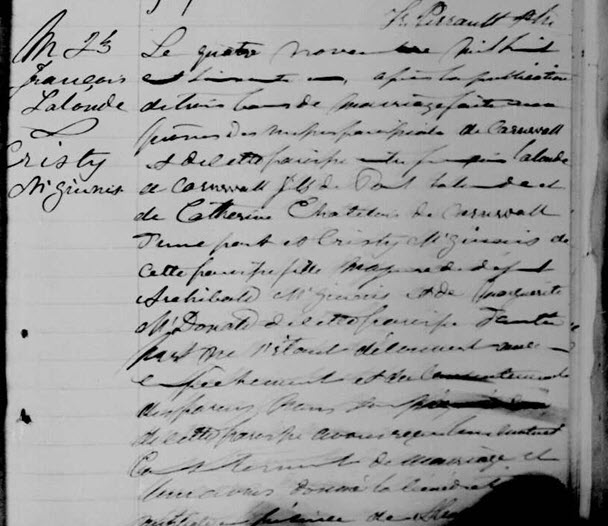 Marriage registry entry for Francois Lalonde and Christy McGinnis (McInnis), 4 November 1861, St. Polycarpe, Soulanges, Quebec, Canada.  Of note is that the church spelled her surname as McGinnis while the family signed the registry as McInnis. 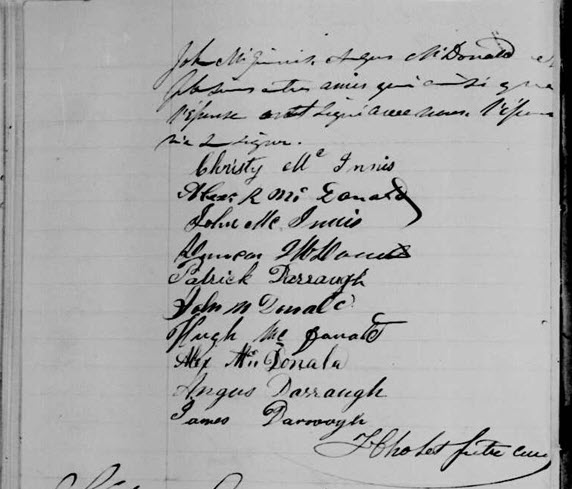 I suspect that these marriages were at first difficult or impossible for the traditional French families to accept. It is my observation that many of these couples of mixed cultures moved west from Quebec to Ontario and Manitoba and seemed to form a culture all their own. Francis and Christy did just that and moved west along the St. Lawrence River to the town of Cornwall, Ontario. The area around Cornwall had a strong English and Scottish influence as indicated by the names of the counties and towns. There are several indications that Christy McGinnis was a fiercely independent woman, such as giving her first name as “McGinnis” to the 1901 Canadian census takers – and this was 40 years after her marriage! Unlike many men and women in her era, she knew how to write and signed her own marriage registry.  Not only that, she signed it first.  Of note, her husband, Francis, did not sign the registry and had no witnesses from his side of the family present at the wedding.  In about 1870, Francis and Christy had a son, Paul Lalonde.

Paul Lalonde grew up in the Cornwall, Ontario area and worked as a boatman. On 7 Jan 1891, he married Marie Néron in the St. Columban’s Catholic Church. According to the 1920 U.S. Census records, Marie (shown as Mary) indicated she was born in New York and indicated that her parents were also born in New York. I haven’t made the connection yet, but I’m confident that Mary’s Néron family originated in Canada. Then and now, the St. Lawrence River, which separates Cornwall from upstate New York, was the international boundary between Canada and the United States. 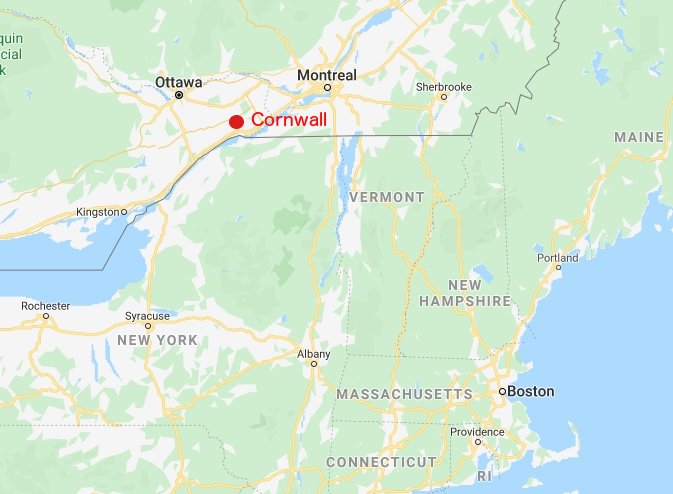 The French in that area had traditionally used the rivers as transportation and a source of commerce. The international border was of only passing interest and a minor inconvenience at most to the residents of the area. The French Canadians and U.S. citizens were essentially one and the same in that region and paid little attention to their nationality, preferring instead to maintain their cultural origins. In fact, not much attention was paid to that border region by either the U.S. or Canada until Prohibition in the 1920’s and later during World Wars I and II.  I’m confident that further research will show that Marie Néron is a descendant of Jean-Joseph Néron from Montreal who immigrated to Quebec before 1760. 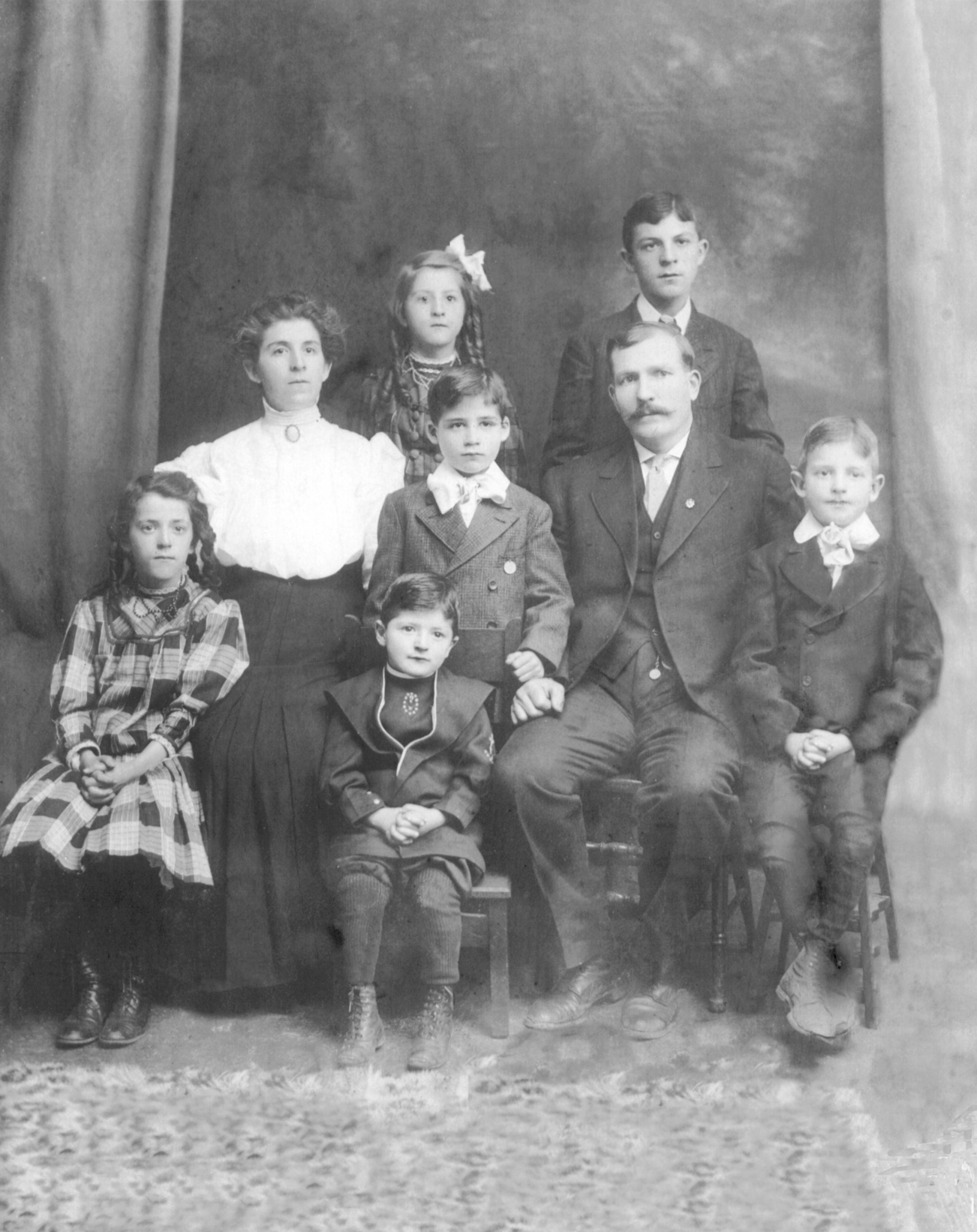 In 1899, Paul and Mary Lalonde emigrated to Lewiston, Maine. It is possible that relatives of theirs had moved to Lewiston earlier in that there were Lalondes already living in Lewiston at the time they arrived. Almost certainly, Paul went to Lewiston for the same reason that almost one million French Canadians moved to the United States from 1840 to 1930 — to find work. At that time, the northeastern United States was undergoing an industrial revolution centered around textile manufacturing and logging.  The agricultural-based economy of Quebec was collapsing at about the same time, spurring an historically significant wave of immigration from French Canada to New England 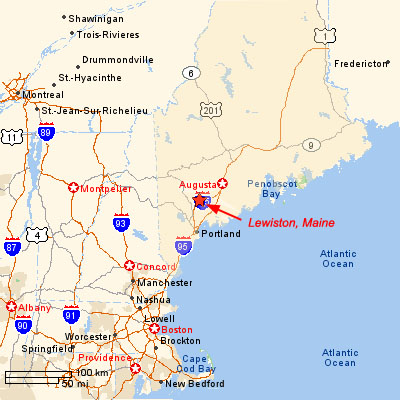 Lewiston, Maine was a key industrial location for the textile and lumber industries. Many French Canadians migrated to the area to obtain work.

Paul Lalonde was a civil engineer at the Peperall Manufacturing Company (a textile mill) in 1920 and held other jobs at local cotton mills. In his later years, he worked at the local school district in Lewiston, Maine. 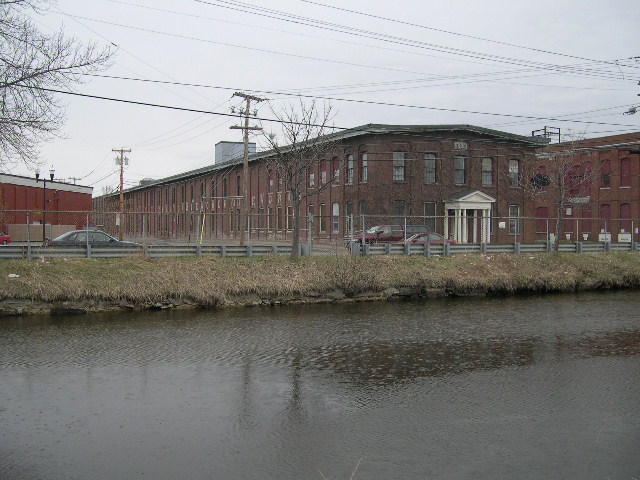 He and Mary lived there until her death in about 1933 and his death on 12 March 1947. On 6 May 1899, they had a son, Francis Richard Lalonde.  Francis (Frank) was born in the U.S. and grew up in Lewiston, Maine, although he spent some time with his grandparents in Cornwall, Ontario as a young child. In 1936, he was a machinist at the Lewiston Bleachery and Dye Works in Lisbon, Maine. On 3 September 1923, he married Alma Rosa Madore, born in Vermont with French Canadian ancestry on 23 November 1902.

Frank and Alma Madore Lalonde are my wife’s grandparents. 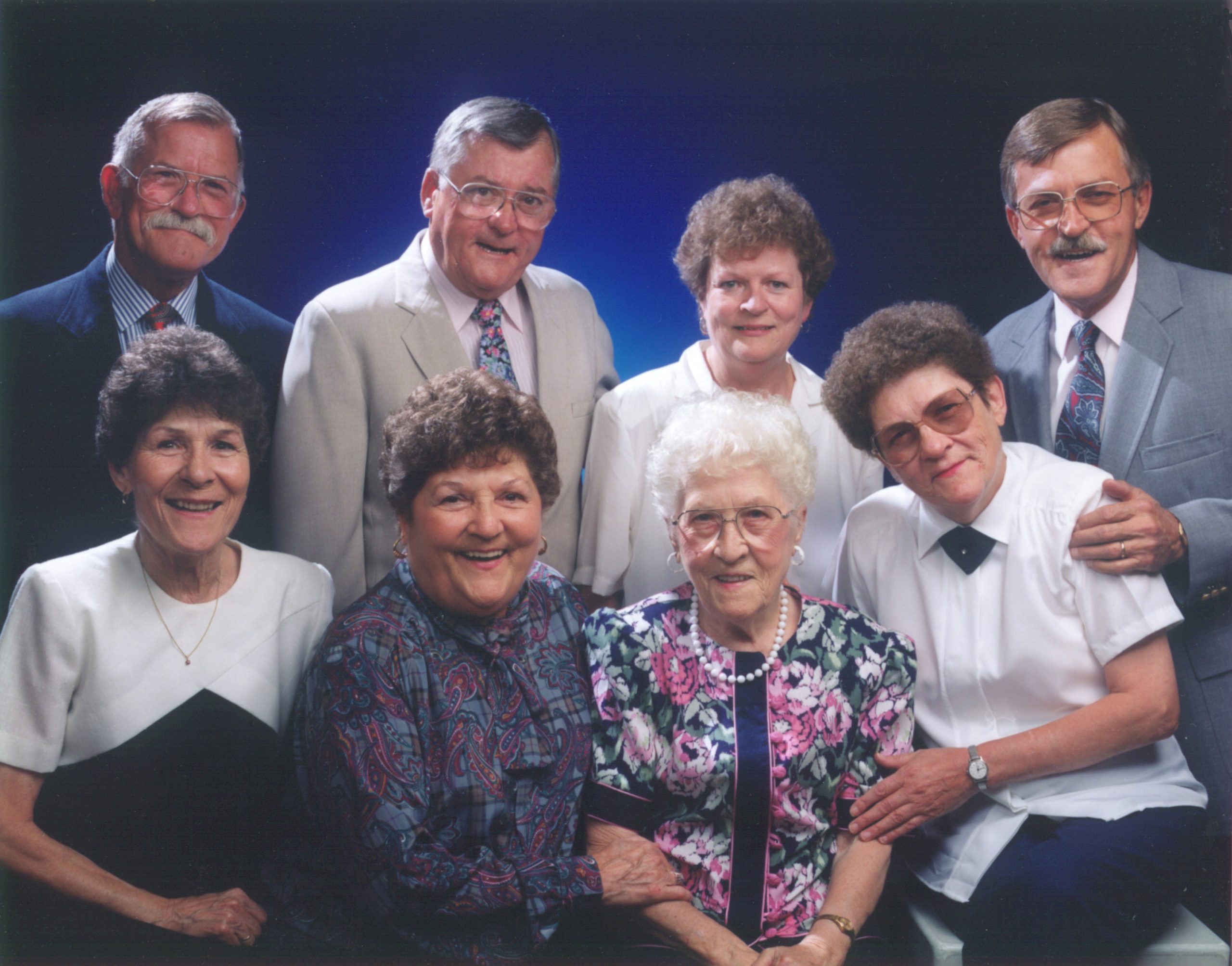 Their daughter, Marlene Vermette, married Paul M. Vermette (the author of this epic) in 1971 and the Vermette ancestral lines that separated in the 1680’s were rejoined after more than 300 years.

According to mathematical theory, it was bound to happen.