Note:  The Vermette family history contains many early explorers who settled in Acadia, an area that is now part of the Canadian Maritime Provinces (Nova Scotia, New Brunswick, and Prince Edward Island).  Settled early in the French exploration of North America, Acadia was the scene of conflict between the French and British for many years.  Following the “Seven Years War”, which ended with the Treaty of Paris in 1763, the French surrendered New France and Acadia to the British.  During Britains’s military campaign, a period known as “The Expulsion” (1755-1764) occurred as part of the French and Indian Wars. The Expulsion was an organized attempt to remove Acadians from their homelands due to their continued resistance against the British. Over 80% of Acadians were forcibly transported to the British Colonies to the south, the Caribbean, and France. In December 2003, the Canadian government formally acknowledged that the deportation of the original French colonists from their homeland was a “great wrong”. 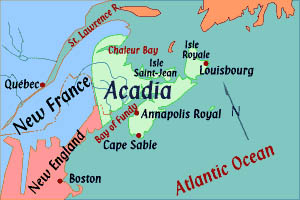 Acadia in 1744.  The area was originally settled by French explorers and is now  part of the Canadian Maritime Provinces.

The original French colonies in North America were located in Acadia. Acadia included what are now the Canadian Maritime Provinces (Nova Scotia, New Brunswick, and Prince Edward Island) and the northern tip of Maine.

Marlene Vermette’s ancestors on her father’s side were early colonists in Quebec and Acadia. Her ancestors include the Cyr family, who were Acadians reaching back to 1650 in the earliest settlements at Port Royal, Acadia (now Annapolis Royal, Nova Scotia).  Some Cyrs left Port Royal to escape the British deportation described below and settled in what is now northern New Brunswick, in an area called Madawaska near the northern tip of Maine.  They intermarried with the Vermettes in the Caribou, Maine area who had migrated from Quebec.  Many other ancestral lines originated in this same region and are also considered Acadians.  The genocide perpetrated on the Acadians (see below) is still being litigated in the British courts, with hearings as recent as 1995.

Acadia’s name originates from Arcadia, a district in Ancient Greece, and was given by a navigator who was impressed by its pastoral setting and beauty.  According to a less reliable source, its name originated rather with the word `Cadie’ designating the little houses in which the Acadians lived; but this hypothesis seems unfounded as the name `Acadia’ was used long before Acadia was settled.

The colonization of Acadia starts just a bit before Quebec’s, with the founding of Port Royal in 1605. Except for some short periods of British occupation, Acadia remained French up to 1713. Prior to 1713, Acadia was made up of the area later renamed by the British as New Brunswick, Nova Scotia, Prince Edward Island (previously known as Ile St-Jean) and some parts of Newfoundland. In 1713, a part of Acadia was ceded to Britain, and renamed Nova Scotia, with the exception of Cape Breton. What corresponded to New Brunswick was claimed by both France and England, but remained under French control until 1755.

The period between 1755 and 1764 was a very tragic time for Acadians.  In those years the British authorities decided to enforce a deportation order due to the continuing resistance of Acadians to British rule.  Acadians were stripped of their rights and placed onboard over-crowded vessels bound for destinations unknown. The traumatic events were to deeply scar the Acadian people whose memory of deportation and exile lasted for generations.

After the fall of Beauséjour in the spring of 1755, events progressed rapidly toward deportation. The British authorities in Halifax continued to ban Acadians from using their guns and canoes and in the late summer the plan was put into motion. On Friday, September 5, 1755 Colonel John Winslow ordered that all males aged 10 years and up in the area were to gather in the Grand-Pré Church for an important message from His Excellency, Charles Lawrence, the Lieutenant-Governor of Nova Scotia. The decree that was read to the assembled Acadians stated in part:

“Gentlemen I have received from His Excellency Governor Lawrence the King’s commission which I have in my hand and by who’s orders you are conveyed together to manifest to you His Majesty’s final resolution to the French inhabitants of this his province of Nova Scotia who for almost half a century have had more indulgence granted them then any of his subjects in any part of his Dominions. What you have made of them you yourself best  know.”

The promise made to the Acadians that families were not to be divided during the process were not kept. Lawrence’s motives were not at all sympathetic to the Acadian’s plight as evidenced in a letter he sent to Colonel Robert Monckton: “I would have you not wait for the wives and the children coming in but ship off  the men without them.”

After Acadians had boarded the ships, orders were given to destroy homes and to round up livestock. In this way Acadians who had escaped, or were planning to, would not have their former homes to run to nor would they have their cattle and sheep to rely on. Today, the very site of the first deportation, at Grand-Pré is marked by a cross.

In total, it is estimated that between ten and twelve thousand Acadians were either deported, imprisoned, or escaped and hid in the wooded hillsides close by. For those who did run, nefarious ways were contrived by the authorities to force them out of hiding. Winslow had warned Acadians that “if within 2 days the absent ones are not delivered up, military execution would be immediately visited upon the next of kin.”

The Deportations Subsequent to 1755

Some Acadians from Cap-Sable were made prisoners, during British raids in 1756, 1758 and 1759. They were deported either to Boston or to France. Following the fall of Fortress Louisbourg (1758) three thousand five hundred Acadians were deported from l’Île Saint-Jean (today Prince Edward Island) to France. Seven hundred of these perished when two boats were lost at sea. In 1762 a deportation failed when Massachusetts authorities refused the exiled Acadians. They were returned to Nova Scotia. It seems that this event was a major factor in the decision to stop the deportations.

A significant number of Acadians settled in Louisiana.  Note that the name `Acadian’ was transformed into ‘Cajun’ in Louisiana. The English pronunciation of “Acadien” explains its spelling (Acadien – Acadjunn – Cajun).

(This history was assembled from various sources on Canadian history and information from http://collections.ic.gc.ca).  You can find additional information about Acadian History at http://www.acadian-home.org