Note:  Jean Baptiste de Lalonde dit L’Esperance, the first Lalonde ancestor on this continent, was a soldier in King Louis XIV’s army.  He was sent to New France in  along with other members of his regiment to protect the farmers and fur traders from attacks by the Iroquois Indians. Over 400 soldiers and officers of the regiment decided to remain in the new colony.  Anthoine Vermet dit Laforme may also have been a soldier in the Carignan-Saliéres regiment.  He is listed as an “unconfirmed” member of the Grandfontaine company.  Jean de Lalonde was a confirmed member of the Monteil company of the Carignan-Saliéres Regiment and departed for New France from La Rochelle on 25 April 1665 aboard the ship Le Brézé. 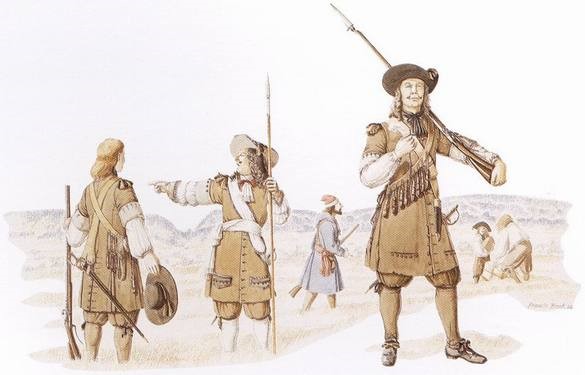 Francis Beck’s Illustration of two soldiers and an officer of the Carignan Salières Regiment. The soldiers on the right and left carry muskets; the powder flasks known as the “Twelve Apostles” hang from their shoulders belts. The officer in the center carries a half-pike and wears a white sash signifying that he is an officer. Courtesy of Canadian Military History

The Carignan-Salières Regiment arrived in Quebec City in the summer of 1665. This was the first expedition of royal troops to Canada. The regiment counted twenty companies and each company was made up of three officers – a captain, a lieutenant and an ensign – two sergeants, three corporals, five anspessades and forty soldiers, including at least one drummer. Four other companies drawn from the regiments of Lignières, Chambellé, Poitou and Orléans coming from the West Indies also came to Quebec City with Marquis de Tracy, the new governor general. Considering that the colony had about 3200 inhabitants, the arrival of some 1200 soldiers and 80 officers had an extraordinary impact on its development.

A body of troops of this magnitude in Canada completely transformed what had until then been a precarious military situation for the colony. Finally, towns could be fitted out with suitable garrisons and new forts could be built to block the Richelieu River, the Iroquois’ traditional route. In just a few weeks, the French went from the defensive stance that had been necessary for almost a quarter of a century to a new tactic: attacking the Iroquois on their own territory. These campaigns were effective and peace was signed in July 1667.

The military mission of the king’s soldiers was juxtaposed with a colonizing mission. Soldiers were encouraged to remain in the country, and offered financial inducements – officers were even offered seigneuries, and several allowed themselves to be tempted. It is estimated that in 1667-68, 30 officers, 12 sergeants and 404 soldiers took advantage of the offer. Many married filles du roi, and had large families: a good proportion of French-Canadians today can count soldiers from the Carignan-Salières Regiment among their ancestors.

The Carignan-Salières Regiment was not totally disbanded, since 4 companies of 75 men each were maintained when the other soldiers of the regiment returned to France. In 1671, however, the four companies were discharged, and the officers were urged to remain in Canada and to strongly encourage all their soldiers to work at clearing and cultivating the land. This decision, while positive for the settlement of the country, eliminated virtually all of the garrison of Canada.